Vancouver, B.C. August 12, 2015 – GLG Life Tech Corporation (TSX: GLG) (“GLG” or the “Company”), a global leader in the agricultural and commercial development of high-quality zero-calorie natural sweeteners, announces financial results for the six months ended June 30, 2015. The complete set of financial statements and management discussion and analysis are available on SEDAR and on the Company’s website at www.glglifetech.com.

For the three months ended June 30, 2014, GLG doubled its quarterly revenues over the comparable period last year, recording $8.0 million in revenue for the second quarter, compared to $4.0 million for the same quarter last year. In 2014, GLG developed a three-pronged sales growth strategy, designed to generate increased revenues from international sales in its three distinct product lines–stevia, monk fruit, and its GLG Naturals+ products. This quarter’s 100% year-over-year revenue growth reflects GLG’s successful execution of this growth strategy, as GLG’s international sales were up 228% from the comparable period last year, making up 85% of its overall second quarter sales. On a six-month basis, ending June 30, 2015, revenue increased 64% to $14.2 million, up from $8.7 million in the first half of 2014. International sales year-to-date are at 85% of total sales (compared to 50% over the same period last year), and have increased by 176% from last year’s same-period international sales

GLG has been working with two state-owned capital management companies (“SOCMCs”) in China to restructure much of its debt. As of the second quarter, GLG had transferred approximately 68% of the Company’s outstanding debt with Chinese banks to SOCMCs. GLG continues make progress with these SOCMCs on transferring additional bank loans to the SOCMCs and structuring longer-term arrangements. The nature of the business of these SOCMCs differs from banks, in that they take a long-term outlook on management of debt. The SOCMCs aim to manage debts with greater flexibility, such as long-term loan terms, debt for equity arrangements, flexible debt retirement, and other long-term instruments. This debt is held at the Chinese subsidiary level, and any such potential arrangements would therefore be done at that level rather than at the corporate level. These SOCMCs also represent a potential source of future capital. The Company is still in discussions with these SOCMCs as to final terms – including interest rate and term of the debt – for the transferred debt.

This year, GLG shipped its first orders of high-purity monk fruit extracts, moving towards satisfaction of the contract it signed last year with Tate & Lyle. GLG has made good progress on the delivery of monk fruit extract in the first half of 2015, and expects to fully satisfy the contract within the third quarter. Producing monk fruit products is a natural extension of GLG’s core stevia product line; these product lines are each naturally sourced sweetener ingredients and monk fruit is often used in tandem with stevia. GLG differentiates itself from other monk fruit producers in four ways: (1) its competitive advantage in establishing agriculture systems in China, including the introduction of Good Agriculture Practices (GAP) by its monk fruit farmers, superior monk fruit seedlings and its proven methods to expand the amount of farming in other crops such as stevia; (2) its commitment to its Fairness to Farmers program, whereby it aims to promote a healthy economy via fair, stable income for farmers in the monk fruit growing region; (3) its advanced processing and extraction technology, which will enable GLG to more efficiently and economically produce monk fruit extracts and (4) its large industrial processing capacity, which well positions GLG for anticipated growth in the monk fruit market driven by international food and beverage companies.

Corporate Rebranding
On January 27, 2015, the Company unveiled its new corporate brand and logo, in addition to the launch of its new website (www.glglifetech.com). GLG’s rebranding emphasizes the Company’s Canadian heritage and reflects its new business strategy, which encompasses three complementary product lines. The new website presents a renewed focus on GLG’s closed loop system that includes superior agriculture programs, production excellence, and our focus on sustainability and corporate social responsibility throughout the supply chain. The vision for the new brand and logo came together in a symbolization of several essential aspects of our Company’s strategy. The maple leaf, a beloved Canadian symbol, forms the centerpiece of our new logo symbolizing our roots as a public company in Canada. 2015 marks GLG’s 10th anniversary as a publically traded company in Canada. The outer portion of the logo – a circular trio of crescents – symbolizes GLG’s three core product lines; stevia extracts, long our flagship product; monk fruit, with GLG entering the market as the highest-capacity producer of this highly desired sweetener; and our Naturals+ line of ingredients that offers both functional ingredients complementary to the sweetener space as well as products tailored to meet particular market needs. The brand and logo well captures the essence of GLG as a proudly-Canadian innovator and leader in the world of natural zero calorie sweeteners.

The launch of GLG’s new website elaborates on these themes, and more. Visitors will find even greater emphasis on our world-class agricultural programs, including the development of superior non-GMO varietals of stevia and, soon, monk fruit, our technological prowess in the production and innovation arena and our commitment to sustainability and corporate social responsibility. Through the vision of its leaders, the excellence of its team members and the holistic nature of and demanding standards manifest throughout its supply chain, GLG leverages these assets to provide leading natural sweeteners and ingredient solutions to businesses globally.

Latest Product Accomplishments Under FDA’s GRAS Program
Consistent with its role as a leader in the sweetener industry, GLG places great importance on adherence to the Generally Recognized as Safe (“GRAS”) program administered by the United States Food and Drug Administration (“FDA”). Through this program, for each of its core sweetener products, GLG undertakes expert studies and in-depth consultation through GRAS Associates, LLC, which convenes independent panels of scientists to spearhead safety assessments for each product to determine that the product is GRAS. The output of each study is then submitted to the FDA GRAS program, whereupon the submission is reviewed by the FDA. If the FDA finds no issues with the submission, it issues a Letter of No Objection, reflecting the FDA’s view that it has no issue with the Company’s determination that its product is GRAS.

GLG has the largest number of stevia extract products certified under the GRAS process, as well as GRAS status for its Monk fruit extract products. Pursuing and obtaining GRAS designations furthers GLG’s commitment to maintaining the highest quality standards for its products, and to ensure that each of its naturally-sourced sweetener products conforms to the GRAS compliance standards.

In February 2015, the Company announced two new products specifically formulated for two industry applications. BakeZeroCal™, for the baking industry, provides significant calorie reduction while also providing the bulking and browning attributes commonly desired by bakers and consumers alike. BevSweet™, for the beverage industry, allows food and beverage companies to reduce calories and naturally sweeten their products with decreased formulation time and with no solubility issues. Each product is a special blend providing an improved taste profile, including a well-rounded sucrose-like sweetness, and ease of use. BakeZeroCal and BevSweet will enable companies to formulate new products and reformulate existing products with less complexity and lower cost.

Appointment of Paul Block to GLG’s Board of Directors

On March 3, 2015, the Company announced the appointment of Mr. Paul R. Block to its Board of Directors. Mr. Block brings a wealth of experience in sales, marketing, and business development as a senior executive in the global food and beverage and sweetener industries. Mr. Block most recently served as Chief Executive Officer of Merisant Worldwide Company, Inc. and the Whole Earth Sweetener Co., LLC. While at Merisant, Mr. Block oversaw the company’s well-recognized line of sweeteners, including the Equal® sweetener brand. Prior to joining Merisant, Mr. Block held C-level positions at Sara Lee Coffee and Tea Consumer Brands, Allied Domecq Spirits USA and Groupe Danone. Mr. Block has been a key figure in developing the global stevia tabletop market through his role as CEO at Merisant and the Whole Earth Sweetener Co., LLC., launching the successful Pure Via® line of tabletop zero calorie stevia sweeteners. Mr. Block is an excellent strategist who complements our current Board makeup and skill set. He has a proven track record of innovation and building shareholder value in the sweetener and food and beverage industries.

As noted above, the complete set of financial statements and management discussion and analysis for the six months ended June 30, 2015, are available on SEDAR and on the Company’s website at www.glglifetech.com. 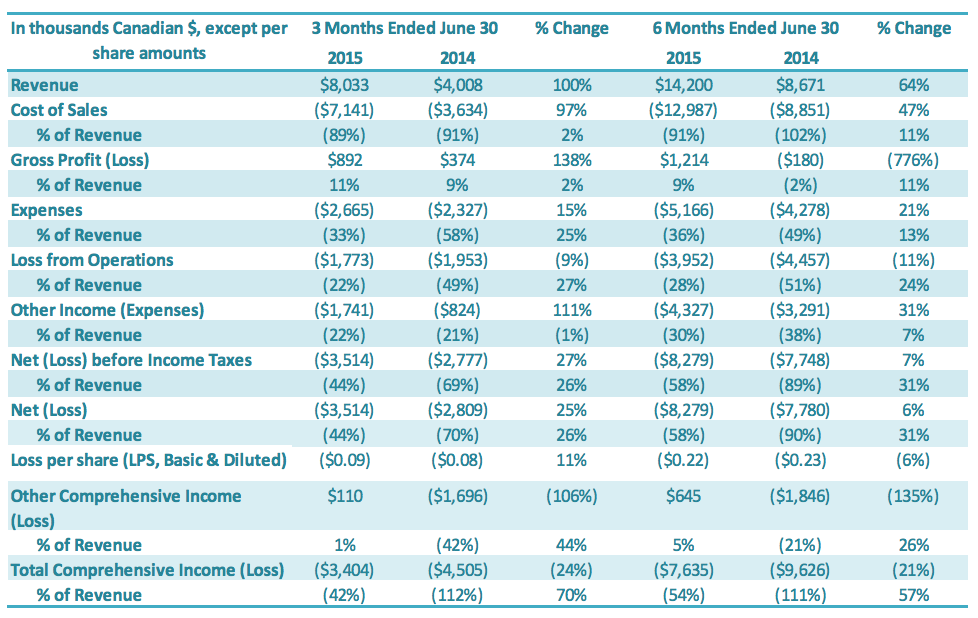 GLG’s stevia and monk fruit business is affected by seasonality. The harvest of the stevia leaves typically occurs starting at the end of July and continues through the fall of each year. The harvest of monk fruit typically occurs starting in October and continues through December of each year. GLG’s operations in China are also impacted by Chinese New Year celebrations, which occur approximately late-January to mid-February each year, and during which many businesses close down operations for approximately two weeks.

Net Loss Attributable to the Company

The Company continues to progress with the following measures to manage cash flow of the Company: paying down short-term loans, reducing accounts payable and negotiating with creditors for extended payment terms, working closely with the banks to restructure its loans, arranging financing with its Directors and other related parties, and reducing operating expenditures including general and administrative expenses and production-related expenses. The Company is continuing its talks with both Chinese banks and state-owned capital management companies, and is actively working with financial institutions to work out longer-term arrangements.

GLG Life Tech Corporation is a global leader in the supply of high-purity zero calorie natural sweeteners including stevia and monk fruit extracts used in food and beverages. GLG’s vertically integrated operations, which incorporate our Fairness to Farmers program and emphasize sustainability throughout, cover each step in the stevia and monk fruit supply chains including non-GMO seed and seedling breeding, natural propagation, growth and harvest, proprietary extraction and refining, marketing and distribution of the finished products. Additionally, to further meet the varied needs of the food and beverage industry, GLG has launched its Naturals+ product line, enabling it to supply a host of complementary ingredients reliably sourced through its supplier network in China. For further information, please visit www.glglifetech.com.

While the Company has based these forward-looking statements on its current expectations about future events, the statements are not guarantees of the Company’s future performance and are subject to risks, uncertainties, assumptions and other factors that could cause actual results to differ materially from future results expressed or implied by such forward-looking statements. Such factors include amongst others the effects of general economic conditions, consumer demand for our products and new orders from our customers and distributors, changing foreign exchange rates and actions by government authorities, uncertainties associated with legal proceedings and negotiations, industry supply levels, competitive pricing pressures and misjudgments in the course of preparing forward-looking statements. Specific reference is made to the risks set forth under the heading “Risk Factors” in the Company’s Annual Information Form for the financial year ended December 31, 2015. In light of these factors, the forwardlooking events discussed in this press release might not occur.

Further, although the Company has attempted to identify factors that could cause actual actions, events or results to differ materially from those described in forward-looking statements, there may be other factors that cause actions, events or results not to be as anticipated, estimated or intended. The Company undertakes no obligation to publicly update or revise any forward-looking statements, whether as a result of new information, future events or otherwise.

This site uses Akismet to reduce spam. Learn how your comment data is processed.